A twelve-bar blues for the intermediate-level piano player with two play-along tracks. Slimline Blues can be used as a choice piece for the Rock School exam Gr 4-5 when played with the backing track.

COMPOSER’S ADVICE
This piece is written to demonstrate the use of the blues scale along with harmonic and rhythmic ideas over the recognized blues structure. Historically,  blues rarely strays from its traditional twelve-bar sequence, although here you will find some subtle differences determined by the composer. The layout described below will provide you with a good foundation. The harmonic structure of this blues is as follows:

Jazz and blues musicians commonly refer to the written left hand in this piece as a walking bass. It follows the twelve-bar structure and uses notes within the chord along with chromatic movements. In a band, the bass player would take this part and the piano left hand would play chords.

The written right hand is based on the C Major scale: C-D-E-F-G-A-B, the pentatonic on C: C-D-E-G-A, and the blues scale C-Eb-F-Gb-G-Bb-C. Combinations of these can be used to improvise your own ideas over the blues structure. Notice how the combination of Major and Minor scales in the Blues scale gives the Blues and Jazz its distinct sound.

There are no reviews yet.

Be the first to review “Slimline Blues” 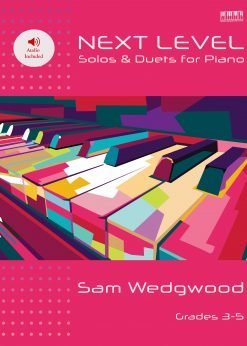