In this week’s interview, EVC composer Paul Birchall shares with Murray McLachlan how the process of writing music has helped him to overcome anxiety. Paul’s two compositions are currently featured in the International Piano magazine May issue.

We live in an era where the misery of poor mental health has impacted on countless lives. Fortunately support, awareness and understanding is readily available for sufferers. In addition to direct medical help, counselling has unquestionably been of enormous benefit, and exists in many different formats and approaches.

General public awareness and sympathy for those suffering from poor mental health is unquestionably stronger than it has ever been before. In the US, May 2022 has been designated as ‘Mental Health Month. In parallel to this we have ‘Mental Health Awareness Week’ in the UK, (May 9-15) with the mental health foundation (www.mentalhealth.org.uk) highlighting ‘loneliness’ as the theme for discussion and awareness.

Loneliness is unquestionably a common reason for mental health to spiral out of control. There is no question that the Pandemic exacerbated isolation, make many individuals vulnerable. Anxiety, stress, paranoia, and depression can all too easily develop alarmingly quickly when individuals have no one to communicate meaningfully with. And of course, as we all know, it is all too easy to feel alone-especially when one is in a crowded room with no-one to engage with meaningfully.

Enter composer-musician Paul Birchall and his deceptively modest collection of pieces entitled ‘Daily Expressions.’ I was moved to learn that Paul was a stroke victim, and that his whole career has had to be reinvented as a result. After years of touring internationally in an exciting performing life, Paul is now producing exciting, accessible music which clearly reflects on many influences- and adds up to a very particular approach which promises to be inspiring and helpful to many.

A number of years back it was a pleasure to review the first volume in this series. We now have a second anthology, described on the cover as being of ‘intermediate level,’ and structured as seven miniatures- one for each day of the week. In mental health month this apparently modest collection of pieces from a composer who himself has suffered from depression offers players and listeners alike a particular escape.

This music’s aesthetic and characterisation certainly owes much to popular culture, though it is also reminiscent of music by minimalists such as Philip Glass. At times, the world of Einaudi seems particularly close. Though the seven pieces each fits neatly onto two pages of approximately forty bars of music, the variety is captivating.

This is music that fuses a popular aesthetic- hardly surprising as in earlier years Paul toured internationally with leading musicians including M People, Jim Diamond, and the Corrs. He composed for film and television too, and this is reflected in the vividly pictorial nature of each piece in this new collection.

There is a lot of scope for the performer to experiment and give their own ideas in each piece and the composer has given his consent for performers to add their own articulation, pedalling, colours, and dynamics to each piece, which can certainly take a wide variety of contrasting interpretive approaches.

Though clearly well- crafted for piano. Paul is equally happy for the music to be played on electronic keyboards (I could imagine effective additional colouristic support from drums, bass and electric guitar backing in some of the numbers) as on acoustic instruments.

Though ‘Monday’ is marked ‘con ped’ I found it fascinating to play it through with no help from my right foot at all, connecting the gentle right hand scale and arpeggio sequences with my fingers. In this way the hushed melancholy of the characterisation was given more purity of tone. In this way the piece becomes a useful warm-up Prelude for the start of the day.

It could even be extended as an exercise so that the left hand takes the right hand notes two octaves lower. But for standard performance, sensitive pedalling would of course be perfectly appropriate. Birchall makes his mark in this whispered miniature through careful use of details, and this is a feature of the cycle as a whole.

Bar three’s left hand D flat completely changes the characterisation of the music on the first line, with its hint of Neapolitan harmonies. The tritone between the third and fourth bar also adds to the sense of foreboding. Accessible but extremely useful music for players from grade 4-5 level onwards.

The more energised texture in ‘Tuesday,’ with its gentle rhythmic counterpoint/syncopation between the hands acts almost as a touching homage to Philip Glass, bringing the world of minimalism into the intermediate repertoire- but without the stresses of stamina and concentration normally associated with this repertoire.

‘Wednesday’ branches off from the classical Alberti bass pattern in a delightfully wistful way. Admirers of Mozart’s celebrated K545 C major will warm to this number with a smile. There is also something of a connection with Einaudi in the sense that the descending triadic harmonies bring wistful longing similar to that composer in his most pastoral and gentle of moods.

With its repeated note figuration and alternation between E minor and G minor in rapid figurations, ‘Thursday‘ could be realised at bravura speed to make an exciting concert display piece. Equally it could be taken at a more modest pace and gradually built up at the performer’s preferred tempo. The ominous slow chords in the final line may be spartan, but after all the activity their hushed economy makes a striking impact.

‘Friday’ is a delightfully content- a wistful waltz full of nostalgia, whilst the cycle finishes with a weekend of heightened contrasts: much excitement and energy ‘Saturday’ then reflection, contemplation, and harmonic discovery via gentle but striking harmonic contrasts on ‘Sunday’ (lilting arpeggios in pedal at first, then quasi-organ left hand slow moving octaves over intense right hand crotchets). 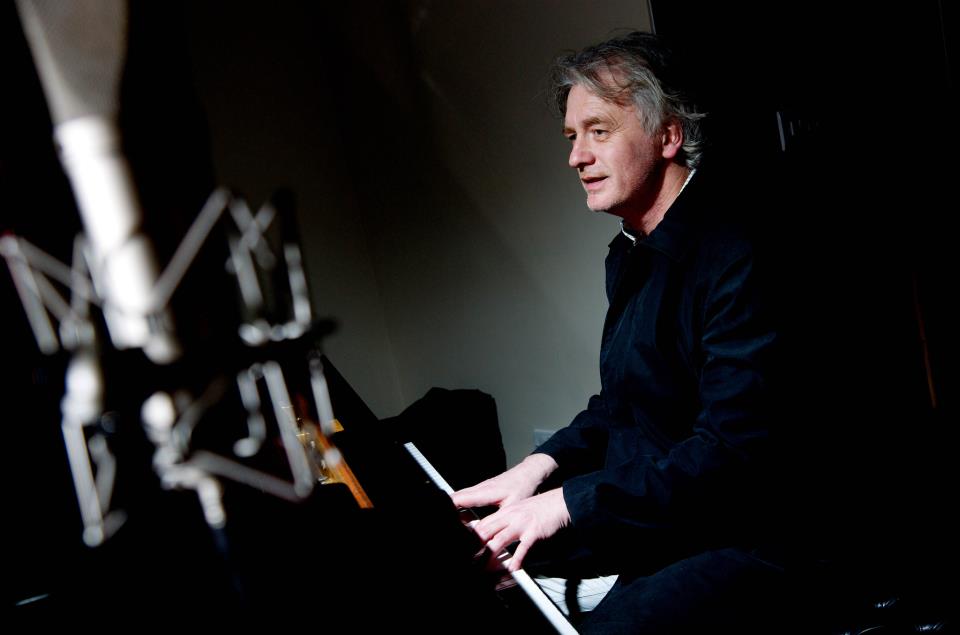 Having played Paul’s new collection, it was fascinating to interview him and learn more about his music, compositional approach, and his career. I began by asking him how important the piano was in his musical life:

PB: My first instrument was the electronic organ around the age of fourteen, I was desperate to attain a sound like my then hero Keith Emerson, unfortunately a Hammond was way beyond what my Dad could afford, but the single manual portable he bought me allowed me to gain some basic keyboard skills. I would also sneak into the music room at school to play the piano.

This was deemed off limits and they locked the piano. I eventually became competent enough to join a local dance band and wherever possible, depending on condition, would play on the venue’s piano. During my career, the Piano has been central to whatever project I was involved in, on tour I would have up to five keyboards with a high-quality digital piano as the main instrument.

I have had the privilege of playing some wonderful pianos in some wonderful locations around the world including, The Royal Albert Hall, The British Embassy Washington, Music festival in Barbados.

MM: Your music seems to have been influenced equally from popular music as much as by serious music. What are the major influences on your work? Who are your musical heroes?

MM: Do you admire Philip Glass? Do you know his piano studies?

PB: I do admire Phillip Glass, I am more aware of his opera and film work, I do have his piano works on CD.

MM: Is it really true that you achieved the remarkable feat of writing a new piece every 24 hours for 28 days running? What motivated you to do this and how did you find the concentration, energy, and discipline to keep going?

PB: It did happen! I’m amazed at myself. Composing is never a chore, once I have the germs of an idea it consumes my thoughts and becomes a really comfortable place to be and return to.

MM: I understand that you began composing each of these pieces by improvising at the piano, taking a break, then returning to the formalised composition process. How important is improvisation in your life? When and how did you start to improvise and how would you encourage pianists who feel inhibited to get started with improvisation?

PB: My first instinct as I sit at any keyboard is to improvise, I’m always looking for inspiration and improvisation allows for surprises. I am good at spotting phrases that may be worth noting and either write them down or record them depending on my location at the time.

MM: Tell us about your musical development from the earliest years. Who were your main mentors? What were the main influences? Did you always stay in Manchester? Has the Manchester scene influenced your work?

PB: During my career I have performed many times in the City, Band on the wall, Free trade hall, Bridgewater Hall, Old Trafford, G.mex and what is now the AO Arena.

For me, The Fall the Manchester based band from this period produced the most interesting music. I consider bands like 10cc, the Hollies and even Freddie and the Dreamers deserve more recognition.

MM: I sense that you have had to dig deep via meditation and reflection in order to triumph as an artist and musician. How has music helped you to remain resilient, strong, and focused as a human being?

PB: I have to be doing, reading, writing, sketching, anything! I’m not sure how resilient I am or have been, I become very focused when working, all consuming, it scares me to start a new project because of the commitment involved.

MM: What plans do you have for future composition projects?

PB: I recently completed a Piano sonata “Astley” along with a couple of fantasias along with a book of pieces entitled “Space Traveller” I am also in the middle of writing and producing the fifth album for my Prog Rock band” Combination Head.”