There is no doubt that winning a top prize can still have extraordinary consequences of the most positive kind for young musicians today.

Last September at the tender age of 23 Kazakhstan-born virtuoso pianist Alim Beisembayev triumphed in the Leeds competition with a series of remarkably authoritative performances that oozed charisma, the intensity of delivery, and the remarkable power of conviction.

Alim’s rock solid security and conviction were evident in repertoire as diverse as Scarlatti, Beethoven’s final sonata, études by Ligeti and Liszt and in the final concerto in Leeds Town Hall under the sympathetic baton of Andrew Manze with the Royal Liverpool Philharmonic:

Since Leeds, Alim has had a whirlwind of important engagements. In addition to debuts with the BBC Symphony and Royal Liverpool Phil, he has played with the RCM Symphony and the SWR in Stuttgart amongst many others.

Recitals in the diary include appearances at Wigmore Hall, Southbank centre, Bath Mozart fest as well as tours in association with the Steinway prize-winner concerts network in Europe and Korea. Immediately after the competitions, Warner Classics released his debut recital disc, and Askonas Holt, one of the most respected and effective managements in the world, offered him representation.

Even though all of this extraordinary, remarkable success appears to have happened to Alim literally overnight, it would be completely wrong to forget the years upon years of dedication, hard work, and perseverance that made it possible for Alim to triumph last September.

After leaving his native Kazakhstan to study in Moscow, Alim made the bold move to come to London, where most of his teenage years were spent studying at the Purcell school under Tessa Nicholson, whom he continued to work with at the Royal Academy. The postgraduate study continued with Vanessa Latarche at the Royal College of Music where Alim was still studying when he entered Leeds.

‘When you enter a competition, do remember that anything can happen, due to the subjectivity of jury members! In the last Tchaikovsky competition, Alim was not chosen to go through to the later stages.
We didn’t really learn anything from Moscow, as there was no jury feedback. It just reinforced what we already knew, competitions are competitions, meaning that ANYTHING can happen! I had drummed that into Alim, so he recovered after the results almost immediately!’
Tessa is most certainly positive about the importance and significance of entering competitions for young musicians who have the requisite talent and positive attitude. She reminded me about the steady long-term development of Alim’s remarkable talent. Entering competitions most certainly played an important part in his progress over the years:
‘For a resilient person who is willing to learn (Alim has both of those characteristics), competitions are very useful. They give exposure, the opportunity to meet other pianists and juries (usually), and most importantly, the intensely focused work, for months beforehand, always aiming for ever higher and higher standards.
In total, Alim did two junior international competitions and five senior ones before Leeds. Some of these were for the experience of trying out a new repertoire, and others were more serious (China and Moscow). They were essential in the build-up to Leeds.’ 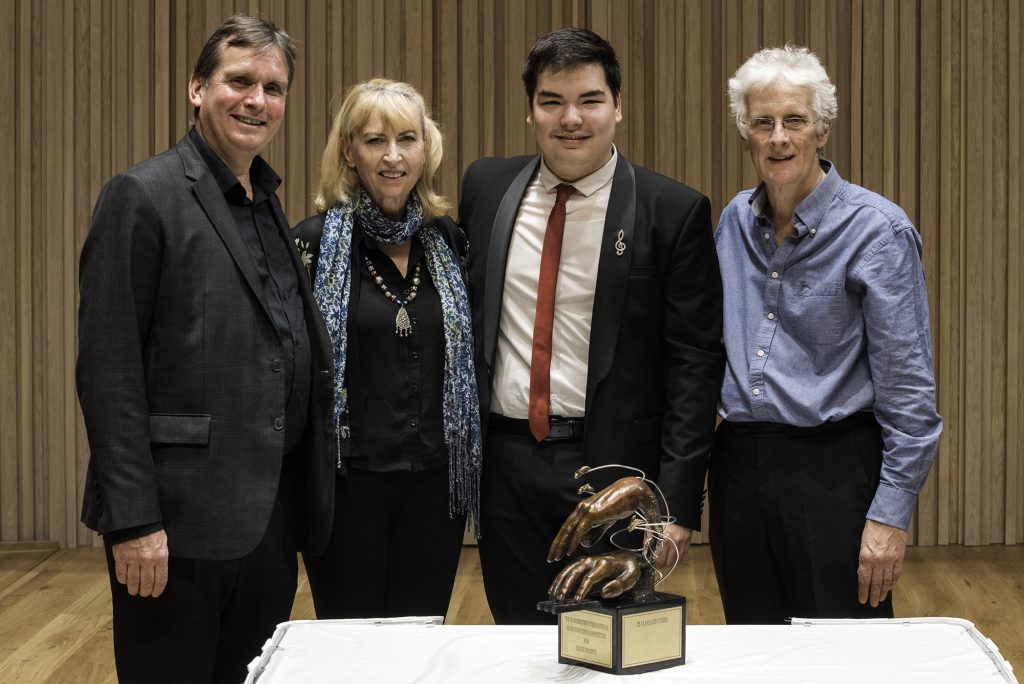 I first heard Alim perform the Grieg concerto in the final of the Weimar Junior Competition back in 2014 where his potential was exciting, if not yet fully developed (he was only seventeen at the time). Consequently, he won first prize in the Junior Van Cliburn – a huge achievement, and then came to Chetham’s summer school, dazzling us all with a vibrantly gripping performance of Tchaikovsky’s first concerto that won the top prize in the 2017 Manchester International Concerto Competition under Stephen Threlfall in Stoller Hall. Back then it was obvious that Alim was continuing to make extraordinary progress.

It was wonderful to invite Alim to the 2021 Chetham’s summer school in advance of Leeds to give him the opportunity to try out some of his recital programmes in Stoller Hall literally a few weeks before the competition started. His seriousness of approach was accompanied by remarkable self-discipline and focus, with Tessa present in his performances to offer excellent advice.

I asked Tessa what, in her opinion, the most important tips where she could give to young musicians thinking of entering a big competition like Leeds. Her concentrated comments make an invaluable summary for everyone who performs in the world of competitions and are worth quoting in full:

‘The most important thing is enough time to prepare. I would say a minimum of nine months is required. Because of the enormous quantity of repertoire required, it is vital to play enough works that have been well prepared previously. It is also important to play to your strengths. Choose a repertoire that suits your strengths. Work in-depth on every single piece. Leave no weak links. Leave no stone unturned! Make sure you have sufficient opportunities to perform everything beforehand (try-outs).’ 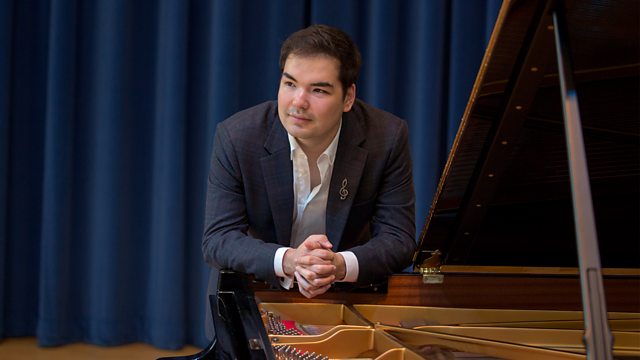 Back in March, I caught up with Alim in Harrogate where he was giving a private house concert for donors and supporters of the Leeds competition. He was relaxed, excited about forthcoming engagements… and on truly dazzling form in a huge selection of Liszt transcendental etudes, preceded by a most eloquent and sparklingly realised Clementi Sonata. Six months after winning first prize, I began my interview with him by asking what he now felt about competitions in general:

AB: Although I’ll have to agree with the frequent referral to competitions as ‘necessary evil’ and the terrible nerves and pressures that apply, there are also things that excite me about them. Firstly, the opportunity to perform in a large space and with a big audience is not an everyday luxury unless you already have a big career. Secondly, hopefully, there will be a lovely piano on which you can convey most, if not all of what you aim to.

And finally, the challenge itself which is a big motivation for me. Some of the biggest challenges in competitions I would say are the amount of repertoire needed and stamina. I have always enjoyed learning new repertoire and the process which begins from choosing certain works to then seeing what they turn into later in the performance’

MM: Could you imagine career success without them?

AB: Yes, of course there are some careers that blossomed without any competitions; however, it is becoming increasingly more difficult nowadays for that to happen. Tremendous luck is required for a career to take off whether you enter competitions or not.

MM; Do you play differently in competitions from concerts?

AA: No. Whatever I strongly believe in, I would try to achieve in any performance.

MM: Have you had disappointments in competitions and if so, how did you overcome setbacks?
AB: It is important to be able to accept or rise above things and move on. When I was younger, I was more courageous and wanted to go in for many competitions and as time went on, I started to feel more pressure and more nervous. Of course, unwanted results are very disappointing and can be damaging to one’s confidence. Therefore, reassurance and self-belief is very important and Tessa was wonderful at supporting me by providing honest and reassuring reflections whenever I faced setbacks.
MM: What advice would you give to young musicians considering entering international competitions?
AB: I guess I have three main pieces of advice from my experience: To treat performing in competitions as if they’re performing in a concert, to learn from their experiences and to remember that luck is a big factor, therefore it is a lottery!
MM: What has winning Leeds meant for you? What mentoring and support has the competition offered you and for how long will this continue? How busy have you been since September?
AB: I remember first applying for the Leeds after Vanessa strongly suggested it to whom I’m now very thankful. I still can’t believe I have won it and it was an incredible moment to remember which was followed by interviews, photoshoots, and a lot of attention for the whole week.
The Leeds team is very supportive and is always there to advise with anything if ever I am in need of it. I learnt about the previous winners’ experiences and also had some media training! I met some of the jury members from the competition who are also very willing to help and gave me valuable feedback and advice.
As a result of Leeds, I was taken on by the prestigious Askonas Holt management which plays a major role in assisting me with my career. Since then, my life has certainly changed and I’ve had opportunities to play with fantastic orchestras (BBC Symphony, Royal Liverpool, SWR Symphony) and dream venues which include the Wigmore Hall.
I’m also immensely looking forward to the tour in South Korea which is to take place in September thanks to the Steinway Prize-winners Network. There are also exciting plans to release a studio recording. I will have to be very careful in the next years in order to continue developing myself and my career in the right direction. It will be a completely new challenge and learning curve!
Visit Alim Beisembayev’s website

One thought on “Alim Beisembayev Interview”